I walked into the new doctor’s office with the hopes that he might be able to help me overcome the debilitating effects of a recent heatstroke. This doctor had been recommended by a friend but I didn’t exactly know why. I sat down to wait in the somewhat shabby waiting room and looked around at the other patients. They were a mixed bag of ages, ethnicities and affluences.

I was called in to see the doctor and explained about the heatstroke that had landed me in an Orlando hospital in July and kept me fatigued ever since. His only response was to write out a prescription for Xanax and hand it to me. My shock must have been written all over my face as I refused it. He shrugged. “You can’t get it back later if you change your mind,” he said, waving the prescription at me. I didn’t even comprehend why he made that comment. I simply walked out of his office.

At that time, I had no idea what I was looking at—but I do now. This doctor was an overprescriber. He was handing out prescriptions to anyone who wanted them, regardless of what their physical problems or needs were. He assumed I was there to obtain an easy prescription for something like Xanax or morphine. I guess that’s what his other patients were there for.

Actually, there was one other thing that happened that made me squint with non-comprehension. He made some vague allusion to a suspension of his medical license that was pending. Again, I didn’t add it up. I was accustomed to seeing ethical doctors who were honestly striving to improve their patients’ health. I’d never met a bottom feeder before, someone willing to put their own profits over their patients’ health or even their lives.

This visit took place in Florida several years before that state became renowned for its abundant pill mills. Especially in Miami, Tampa Bay and the surrounding areas, pain management clinics cropped up by the dozens. People arrived from all over the Southeastern United States to wait in long lines at these clinics so they could go home with hundreds of pills of opioid painkillers.

According to the Los Angeles Times, by 2010, ninety of the country’s top 100 opioid prescribers were in Florida. Approximately 500 million pills were distributed in the state, many destined for consumers in other states such as Tennessee, Ohio, Kentucky, the Carolinas or West Virginia.

Then the State of Florida took action. They changed a few key laws that effectively shut down most of the illicit pain management clinics that were handing out big bottles of drugs such as these:

Why were these doctors handing out prescriptions for more than just opioids? For a time, an opioid, an anti-anxiety benzodiazepine and a muscle relaxant like carisoprodol was a highly sought-after combination that provided a high similar to that of heroin. This combination has been nicknamed a “Houston Cocktail” or “Las Vegas Cocktail.”

But across the Southeast, it was prescriptions for opioids that were predictably the most lucrative. These pills could be carried back to a person’s home state and sold for a dollar a milligram. If a person could hit five pain management clinics in Florida and take away a prescription for 90 tablets of 80 milligram OxyContin from each one, they could sell them for as much as $36,000 in Ohio, Kentucky or another state.

Once Florida laws changed, many of these pain management clinics folded their tents and disappeared. By 2014, the number of clinics had dropped by two-thirds. But doctors who wanted to keep raking in the cash from these quick patient visits simply migrated to other states such as Ohio or Tennessee where too many of them still exist today.

As of August 2019, the U.S. Department of Justice still found plenty of doctors to prosecute for illicit prescribing of medications that are popular among addicted individuals. On August 29th, the DOJ announced the indictments of 41 people accused of diverting more than 23 million opioids, benzodiazepines or muscle relaxants from legitimate medical use to those who would misuse them. Their list of people to be prosecuted included medical providers, clinic owners and managers, pharmacists, pharmacy owners and managers as well as drug dealers and traffickers.

A month later, 13 individuals including 11 doctors from the Appalachian area were charged with the overprescription of controlled substances. More than 17 million pills had been distributed by this group.

It’s obvious that we are far from done with closing down pill mills and prosecuting professionals who are profiting by taking advantage of those susceptible to addiction.

There are some obvious ways to identify one of these businesses and some not-so-obvious ways. Business people and residents of the area can watch for indicators like these:

If you visit a doctor and you receive an unexpected, unneeded prescription like I did, that’s another tip-off that there’s something wrong with that practitioner.

Some of the less-obvious indicators that might be used by investigators include:

These signs can be detected by consulting a state’s Prescription Drug Monitoring database or direct investigation of a clinic’s or pharmacy’s records.

If you see any of these signs of dangerous and even deadly overprescribing, you can send a tip to the Drug Enforcement Administration on this page. Prescribing addictive substances for profit and without concern for a patient’s welfare is a dangerous practice that deserves to be wiped out entirely.

60 medical experts are currently under federal charges for doling out highly addictive and potentially lethal opioid pharmaceuticals for money or sexual favors from addicts, or for cash incentives from crooked pharmacies. 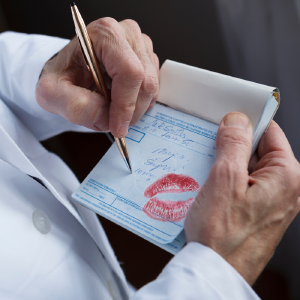