Addiction Is Everywhere:
What Can We Do About It?

And to make matters worse, we’re going about addressing those problems with “solutions” such as forced incarceration of addicts, and band-aid “quick fixes” in the form of group meetings, outpatient support, or worse, medication-assisted “therapy.” In addition, we give minimal support and funding for addiction treatment.

So drug use is more prevalent now. According to a report done by the former U.S. Surgeon General, someone dies in the U.S. from an opioid drug overdose every nineteen minutes. And of those who struggle with addiction, only about ten percent of them ever get the help that they need.

In the words of former Surgeon General Vivek Murthy “At a time when we are resource-constrained already, we cannot afford, for humanitarian reasons or financial reasons, to not address addiction in America.”

Clearly, we are aware of the drug problem for being as serious as it is. So why then are we not taking the correct levels of action in addressing it? Why do we constantly turn to archaic methods of addiction treatment or band-aids, quick fixes, and shortcuts?

Legal Drugs – The Villain of the 21st-Century

A big part of the problem is that the drug use of today no longer wears the same face that it did twenty years ago. Today, Americans struggle with legal drug use, legal drug addiction, and legal drug problems. These are the problems we have to contend with now.

According to the National Institute of Drug Abuse, prescription drug abuse is one of the biggest issues on the drug scene, particularly among young adults. In 2014, at least seventeen-hundred youths died from overdoses on pills, giving us insight as to just how vicious this problem can be. In fact, that same research indicated that about twelve percent of young people ages eighteen to twenty-five have been experimenting with pharmaceutical drugs.

And it is not just young people that are being hurt by prescription drug abuse habits and trends. This is a problem for all of America. According to the Substance Abuse and Mental Health Services Administration, 2014 research indicated that about fifteen million Americans ages twelve and above-used prescription drugs at least once in the past year. Six million did so in the month leading up to the survey, and this number reflects only the individuals who admitted to using such drugs.

Twelve percent of all street drug users admitted to using pills as their first “drug of choice,” which identifies prescription drugs as being a considerably dangerous gateway drug.

Prescription drug use is also highly expensive. According to the Substance Abuse and Mental Health Services Administration, estimates show that the U.S. spends about seventy-two billion dollars every year in medical costs alone in trying to help people who are addicted to prescription medications. Addiction is everywhere, and it’s everywhere because people are getting hooked on substances that were created to help alleviate medical issues, not cause them.

When Alcoholics Anonymous was formed in 1935, it was intended to treat something very specific, i.e, alcoholism. When Narcotics Anonymous was created thirteen years later in 1948, the concept was a similar one, but intended for drug addiction instead.

The idea behind AA, NA, and the Twelve Step approach was the “Disease Model” concept, that addicts had a disease, that it was an incurable disease, and that only by a very strict and stringent way of life could people possibly cope with such a disease.

Currently, Americans are struggling with addictions to many different substances, whether an illegal drug, alcohol or even a legal pharmaceutical drug. How can we say that John Doe has a “disease” when he becomes dependent on a pharmaceutical pain reliever that his doctor prescribed him after a bad accident? Traditional treatment methods did not contend with millions of Americans falling prey to, not the Devil's Nectar, but instead to what are supposed to be the miracles of modern-day medicine: prescription drugs.

And who’s to blame here? In older scenario, disease theory would label John an addict and that label would stay with him for his lifetime. But is John really in the wrong? Or is it the pharmaceutical companies who manufacture the highly addictive drugs to begin with?

When we flow power and strength to the disease theory, we miss the potential for helping 21st-century addicts. We need to take a second glance at how we are addressing addiction in America today because this problem is now so much bigger. If we continue to beat the drum of an outdated addiction treatment method, if we continue to label drug addicts and alcoholics as disease-ridden patients, we are never going to solve the addiction epidemic that assails us.

We have to change the way we are addressing addiction in the United States. Addicts need help, not labels or diagnosis codes. With tens of millions addicted, we need to create safe and effective addiction treatment programs that foster growth and change. We need to support concepts that strive for betterment and a reversal of one’s own dwindling spiral.

Any addict, no matter how horribly dependent they are on drugs and alcohol, can change and must. They just need our help to get over the hump that is their addiction crisis. But remember that no one is born an addict or just wakes up one morning and says, “Today I am going to become a drug addict,” so no one should ever have to die an addict.

Is There Such a Thing as an Addiction That Can’t Be Treated?

If you have suffered from addiction or if you have had a family member or loved one who bore the struggle of dependency to addictive substances, you know the sheer severity of such an affliction and what it means to struggle with habits like these.

What is the Scope of Addiction in the World?

The drug epidemic that has swept across America is not just a problem in the States. When the camera lens is zoomed out to examine the planet as a whole, it becomes clear that the entire world struggles with a growing drug addiction emergency. 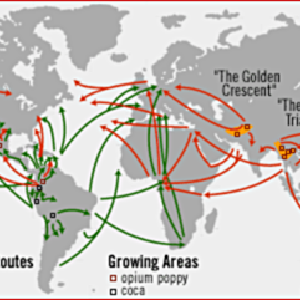