One of the most critical factors in determining the success of a recovering addict’s stay at a residential treatment center is the amount of time they get at that rehab. Of course, other factors like the type of program they are working through, the facility, the staff, the culture/environment, and so on are also a huge influence, but let’s talk about the time spent in rehab.

Most addicts use drugs and alcohol for years before they seek help. Assuming an addict can find a treatment center which offers a program one can get access to, the vast majority of drug and alcohol rehabs in the U.S. offer only about 2-6 weeks of inpatient or residential care. I have to ask our readers, how is someone who has had drugs and alcohol as a significant, critical part of their lives going to get rid of all of that in just a few weeks? In fact, most addicts are told they will be in and out of treatment within only 28 days.

Four weeks to resolve and eradicate a drug habit that’s plagued one’s life for years? The concept is pretty laughable.

I did some more research, to try and find out why most rehabs only offer 28-day programs. What was the big idea behind this 28-day figure? Is it a magic figure? Do addicts magically get “cured” of drugs on the 28th day in rehab? Is 28 a mystical number? Is it a belief thing or a good fortune thing? Having been lucky enough to only work in rehabs which offered long-term care throughout my career, I was quite perplexed to find that the majority of drug rehabs only provided four weeks of care.

I’m not the only one who is incensed by this and who is looking into it. The Juvenile Justice Information Exchange featured an article by Ed Finkel back in 2015 which explored this subject matter in-depth. Another article at National Public Radio, also from 2015, discusses the issue.

It’s painful to me to see, right before my eyes, multiple instances of young men and women (much like many of the young people I’ve helped get clean), who died from a drug habit because their insurance company wouldn’t cover those extra weeks that their clients needed to stay in rehab a bit longer. But that is the status quo in America, and that’s why we need to reform how our health insurance programs work.

Research Points to Long—Term Care as the Better Option

The National Institute on Drug Abuse is one of the leading groups on drug and alcohol addiction and addiction recovery. In one of their articles on how long treatment should last, NIDA writers say that, “Research has shown unequivocally that good outcomes are contingent on adequate treatment length. Generally, for residential or outpatient treatment, participation for less than 90 days is of limited effectiveness, and treatment lasting significantly longer is recommended for maintaining positive outcomes.”

I also appreciate the commentary of Dr. Mark Willenbring, the former director of treatment and recovery research at the National Institute for Alcohol Abuse and Alcoholism, who spoke in support of long-term addiction treatment. He spoke derisively of the traditional 28-day program, insisting that recovering addicts get as much help as they need. According to the doctor, “You don’t treat a chronic illness for four weeks and then send the patient to a support group. People with a chronic form of addiction need multimodal treatment that is individualized and offered continuously or intermittently for as long as they need it.”

Health 24 did an article on a South African study of addiction treatment factors. This study received almost no reporting in the U.S. But the study found that treatment programs in South Africa which offered less than 30 days of care only offered about 55 percent success rates. Treatment centers which offered more than 30 days of care garnered about 84 percent success rates. Clearly, more time in treatment means a better chance of staying sober—and isn’t that what going to treatment is all about?

On the bright side, we are making progress. But it’s been excruciatingly slow progress.

In 2008, a federal law was passed which forced insurers to “Consider drug and alcohol addiction the same as any other medical problem.” That’s from the NPR article I mentioned earlier. However, that law has received minimal enforcement. Laws don’t work if they are not enforced, so that needs to change.

An article in U.S. News spoke in support of the Affordable Care Act. According to Peggy Bailey, the director of the health integration project at the Center on Budget and Policy Priorities, “On the marketplace side, the ACA helped strengthen rules that require most plans to cover mental health and substance abuse services at the same level as they do for physical health. [Prior to the ACA] on the Medicaid side, if your primary condition was substance abuse disorder, that wasn’t enough to qualify you for Medicaid.”

So that’s a good sign. And non-profit, grassroots efforts are sprouting up all across the country, usually championed by grief-stricken parents who lost a young adult child to a drug overdose because their son or daughter did not have access to treatment or did not get enough time in treatment. An excellent example of this is “Anthony’s Act” which was created by Anthony’s mother, Chris Fiore, after she lost her son to an overdose. Her son had been in and out of rehab, never experiencing more than 21 days at a center, all because insurance wouldn’t cover more time in rehab.

Cris Fiore’s “Anthony Act“ has gathered more than 90,000 signatures in a petition to amend the Affordable Care Act to provide for a minimum of 90 days at inpatient drug and alcohol rehab centers.

This is all movement in the right direction. But the health insurance industry is slow to change its ways, and that’s costing lives. Since drug and alcohol addiction has become such a lethal issue (70,200 people dead in 2017 from drug overdoses, mostly opiate overdoses), it would seem to me that addiction is irrefutably a medical emergency. If our health insurance companies are not going to provide adequate coverage for medical emergencies, then what good are they anyway?

As the addiction crisis seems to grow and grow, surging forward no matter what we try to do to stop it, we’ve had to get a creative in our methodology for tackling the problem.

I understand the media has to get its headlines somehow, so I’m usually not surprised by what I see in the news. But the most recent issue of U.S. News had an article titled, “Could CBD Treat Opioid Addiction?“ Such a statement is undoubtedly an eye-grabber, and it’s a dangerous statement too. 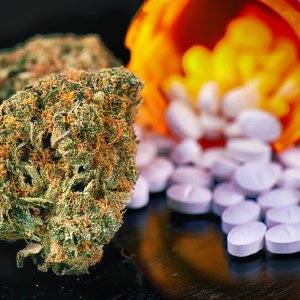