Sharing Drug Use Stories With Kids To Empathize May Backfire

It is widely recognized that parents can make an enormous difference in determining whether or not their kids start using drugs by taking the time to talk to them about the subject. While many parents avoid the topic, whether because it is uncomfortable or because they worry about spoiling their children’s innocence, the vast majority of parents understand why it is important to confront the matter and to ensure that their children have the facts about exactly why they should “just say no to drugs.”

Among those parents who do take the initiative and have “the talk,” many decide to go all the way by admitting to the fact that they actually had themselves used drugs in the past. In some cases, the purpose of this admission is to express empathy, to make it clear that they understand why their children may feel tempted to try drugs. Usually, this is followed by an explanation of why it was a mistake and why the parent regrets having used drugs. A recent study which was published in the February issue of Human Communication Research indicates that this could have an effect which is directly opposite to what the parent intended.

The researchers who carried out the study conducted interviews with 561 students in the 6th through 8th grades, during which they focused on the students’ attitudes concerning drug use. Their goal in performing the study was to confirm previous studies which had demonstrated that teenagers would be less likely to engage in drug abuse if their parents disclosed the fact that they had used drugs. What was discovered not only did not confirm the earlier research but actually invalidated it.

During questioning, the researchers not only asked whether the children’s parents had admitted to using drugs, but also whether the parents had communicated feeling regrets over having done so. They found that those whose parents had previously shared tales of their own history of using drugs were less likely to say no to drugs. This was true even among those whose parents had expressed feeling remorse over their past drug use. While it is unwise to make parenting decisions based on sweeping generalizations about children — each child is a unique individual who has been raised in a different environment than any other — the general trend appears to indicate that sharing the fact that you used drugs in your youth may not only not help you in your attempt to keep your children off drugs, but could actually undermine your efforts.

Should You Tell Your Children That You Used Drugs?

The researchers forwarded the hypothesis that the reason for this correlation between a parent’s admission of past drug use and neutral or positive attitudes towards drugs on the part of children may be due to the fact that the children conclude that if the parent survived his or her brush with drugs, so will the child. Instead of disclosing the fact that you used drugs, it is recommended that you provide general information about the dangers of drugs, how they work and the effects they have on the body, as well as perhaps sharing any stories you have about people whose lives you personally saw damaged through drug use. Another issue which was not raised by the researchers was the age at which these children were informed of the fact that their parents had used drugs. Since the students who participated in the study were all of middle-school age, it can be assumed that they were no older than 14 years of age at the time when their parents told them that they had used drugs, while many may have been as young as 11 years or perhaps even younger.

Children at that age are still highly impressionable and tend to more closely follow their parents’ example. Even if the moral of the story is that drugs are bad, the child is still likely to notice that the parent did try drugs in the first place. If you are anxious to help your children avoid drugs by discussing the subject with them but don’t want to be dishonest, you may find a middle ground by sharing the basic information with them when they are younger but waiting until they are older before telling them your own story.

talking to kids about drugs
AUTHOR

As drug addiction statistics and death rates climb, more parents are concerned that their sons and daughters will experiment with mind-altering substances and become hooked. What can parents do to ensure their kids never use drugs? 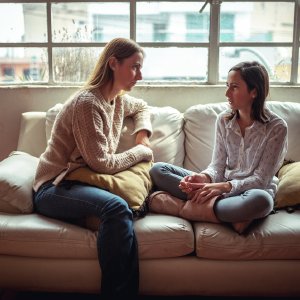