In any field or industry, when important changes occur, there’s a possibility of sudden pendulum-swing reactions to those changes. That exact phenomenon has been seen in the medical field in relation to the prescribing of opioid painkillers. For years, prescribing more pills than might actually be needed to deal with pain was the norm among doctors and dentists. When public awareness of the opioid epidemic was raised, some doctors reacted by refusing to prescribe pain medication, even when it was obviously needed.

I experienced this pendulum swing in my own family. An elderly relative was in the hospital as she approached the end of her life. Her daughter struggled to get her mother’s pain alleviated and found the hospital’s doctors unresponsive. The problem was that the doctors didn’t have an exact diagnosis for what was killing her. It wasn’t enough that she was in her 90s and in severe pain. The problem was also that they had missed diagnosing her lung cancer. Once they detected the lung cancer, they were willing to prescribe opioids to control the pain.

The same scenario has played out thousands or even millions of times in every corner of our country. One woman who visited the Narconon Facebook page commented that her 81-year-old grandmother broke her wrist in five places and was given a non-opioid painkiller in the emergency room. We’ve had other comments from individuals who have suffered for years from severe arthritis pain that used to be alleviated by opioid painkillers, but now their doctors refuse to refill their prescriptions.

From overprescribing to a fear of prescribing, the pendulum swung from one side to the other.

In 2016, the Centers for Disease Control and Prevention issued two sets of guidelines—one for prescribers and one for patients—on the use of opioid painkillers for chronic pain. To minimize the risk of addiction, “Start low and go slow,” meaning to use the lowest dose possible when beginning treatment and increase that dosage slowly until the goal of pain relief is reached. The CDC also recommended “When opioids are needed for acute pain, prescribe no more than needed” to discourage practices like sending teens home with a full bottle of pills after a wisdom tooth is pulled.

In a landscape devoid of guidelines, the CDC’s publication was helpful, but not enough to keep the pendulum from swinging toward the refusal to prescribe that we have seen in the last couple of years.

News media began reporting on individuals caught in this impasse. It’s easy to find stories like these:

Legislators got into the act, passing new laws in an attempt to prevent misuse of these drugs. More than 20 states have passed laws regulating how doctors can prescribe opioids. Some of these laws may actually have made things worse, making doctors afraid of prosecution.

A New Focus on Ethics

At a medical conference in Las Vegas in September 2018, Dr. Kevin Zacharoff of SUNY Stony Brook School of Medicine offered his audience a new set of guidelines based on ethics.

What is meant by ethics? One definition is “the rules of conduct recognized in respect to a particular class of human actions or a particular group, culture, etc.”

As taught at Stanford University, medical ethics has four components that Dr. Zacharoff interpreted for use in the prescribing of opioids for pain.

Simply Another Step in the Right Direction

Dr. Zacharoff’s address to attendees of PainWeek 2018 is not by any means a definitive solution to either overprescribing or underprescribing. It is simply a concrete sign that the medical field is trying to correct itself using a greater understanding of medical ethics.

Solving the opioid crisis is not going to be accomplished with any one, sweeping action. It’s going to take dozens, maybe hundreds of smaller changes from the highest levels of government to the most grassroots actions. But when we see each of these signs of thoughtful improvement, we can perhaps cheer quietly and lend our support and endorsement of that action.

To read our in-depth examination of how prescribing practices can be corrected, click on the following link: Solving the Opioid Crisis: Returning Control of Prescription Drugs to the Right Hands

Who Should Control the Distribution of Pain Pills?

Recently, the drugstore chain CVS announced that it would limit the number of pain medication pills it would distribute. Should a drugstore be in control of the distribution of painkillers? Or doctors or parents? Narconon weighs in. 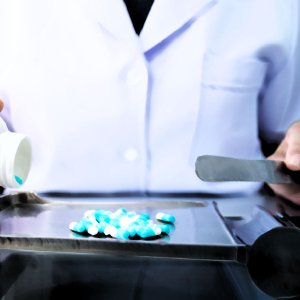