According to a Washington Post article published February 2015, the United States and New Zealand are the only two countries that allow direct to consumer advertising for pharmaceutical products. Direct To Consumer Pharmaceutical Advertising (DTCPA) can be defined as” an effort (usually via popular media) made by a pharmaceutical company to promote its prescription products directly to patients.” As noted above, the U.S. and New Zealand are the only countries that allow DTCPA that include product claims. [Ref. 3].

“Just ask your doctor for a prescription.”

This advertising has opened a floodgate of patients asking their doctors for medication prescriptions for drugs/medications they may not even need in order to address some up-to-now unknown “ailment” they saw on TV or saw advertised in People Magazine. If you turn on daytime television you will be inundated with advertisements for antidepressants, Osteoporosis medications, drugs to help quit smoking or to handle your “restless leg” syndrome or any other malady you might not have even guessed you had or even knew existed. They end with, “just ask your doctor for a prescription.”

Canada allows advertisements that mention the product or its professed purpose, but not both. In 2008, 22 or the 27 nations in the European Union (The EU) voted against DTCPA. So we can assume that most countries felt that direct to consumer medication/drug marketing was not a good idea.

John Oliver did a segment on this on his HBO show, THIS WEEK TONIGHT, which you can view at John Oliver’s Youtube Channel. Per this piece; 9 out of 10 pharmaceutical companies spend more on advertising and marketing than on research. They wine and dine prescribers; offering all-expense paid trips masked as conferences as well providing their offices with free promotion and administrative supplies, like pens and pads, drug samples, computers, etc. This has been going on for as long as we have had Pharmaceutical Representatives wheeling their briefcases into doctor’s offices with the latest and greatest new drug. They hope to get the doctor to order his patients to take the drug, making it necessary for the patient to purchase it from the manufacturer. Oliver, in his segment, suggests you ask your doctor if they are taking money from the pharmaceutical company and what is the money being used for. I suggest adding the question, are these perks from the pharmaceutical company in some way influencing the doctor’s treatment plan for you. These are very valid questions. I highly suggest you watch the segment; it is less than 20 minutes long and highly informative and entertaining. Collectively, the pharmaceutical companies spend about 8 times as much money on physician advertising (advertising to the physician themselves) as opposed to “direct to consumer advertising” ($24 billion to $3 billion). [Ref 3] They get this money from the sales of their product, medication. I don’t know about you, but I have seen the cost of medication skyrocket, while the availability of cheaper generic medications dwindles.­­­­­­­­­­

In 1962 Congress gave the FDA legal authority to regulate prescription drug advertising and labeling, leading the way to direct to consumer drug advertising. This occurred just 2 years after taking cigarette/tobacco advertising away, and in the middle of our drug revolution on campuses all over the country.

Then in 1969, the agency issued its regulations for prescription-drug advertising. It stipulated that the prescription drug ads must:

1) Not be false or misleading.

2) Present a balance of information without bias, describing both the risks and benefits of any drug.

3) Include facts that are relevant to the product’s advertised uses.

4) Include a “brief” summary that mentions every risk described in the product’s labeling.

The FDA’s Division of Drug Marketing, Advertising, and Communications (DDMAC) is responsible to ensure these advertisements are in compliance with the law. The FDA is the agency that approves pharmaceutical products for distribution and consumption.

In the 1980s the political climate in the United States became more favorable to the pharmaceutical industry (Big Pharma) and as a result, DTCPA started to become big business on television, radio and in print. Merek (a major pharmaceutical company) ran the first direct to consumer print ad in Reader’s Digest. Soon afterward Boots Pharmaceuticals ran the first direct-to-consumer broadcast ad promoting its low priced prescription brand ibuprofen (Rufen) to compete with Motrin.

With this, the FDA had to figure out how best to keep the American people safe by regulating these advertisements. In 1983, the FDA asked for a voluntary moratorium on these ads while the FDA could study the situation and come up with fair and balanced standards. In 1985 the FDA published a notice in the FEDERAL REGISTER claiming regulatory jurisdiction over DCTPA once and for all. With this announcement, they kept in the “fair balance of information” as well as the “brief summary” requirements for advertising to health care providers. The FDA felt these were sufficient to protect the consumer against deceptive or misleading claims from the pharmaceutical provider in their advertisements.

This ruling brought about an avalanche of print ads such as we see in the newspaper and all over our popular magazines today. With the need to satisfy the “fair balance” and “brief summary” standards easily met with the “small print” in written ads, however, the cost of purchasing enough on-air time to advertise on television or radio and include all information required by law, proved not to be cost effective at the time. The only advertising put on the air [television or radio] were reminders, or help-seeking ads, which made no product claims and therefore the “fair balance” or “brief summary” requirements did not need to be met.

As time passed, in 1995, the FDA held a hearing regarding easing the broadcast DTCPA regulations, recognizing the prohibitive time and expense the rules required. Then in 1997, it issued guidance, and final regulations were issued in 1999 which allowed broadcast DTC product claim ads to include a “major statement” and “adequate provision” to satisfy the “fair balance” standard. The longer “brief statement” was no longer required. It was only necessary to provide a website or phone number to disclose the omitted information.

In 2004 The regulations regarding the DTCPA were further relaxed; it was no longer mandatory to reprint the complete prescribing information in print product claim advertisements. The new regulations allowed for a “simplified brief summary.” This meant that pharmaceutical companies were only required to present the “major risks” in simplified language that would be easier for the average consumer to understand. To me, this would mean the prescribing health care professionals would have to take more responsibility to educate their patients regarding medications before prescribing them.

Also, the DEA does not receive enough funding to police these regulations. Their funding is minimal when compared to Big Pharma’s marketing budget.

Let’s look at some of the effects of these acts. Let’s see what happened once advertising of drugs and medication became the norm [Reference 5]:

1) Millions of dollars were made from Barbiturates (sedative or sleep-inducing drugs) and overdoses surged in the 1960s and 1970s, around the time that these ads were approved. (Reference 5).

b. Aspirin hit production of 37 million pounds in weight;

c. Salicylic acid (a peeling agent used for the treatment of various skin diseases like psoriasis or acne) 13 million pounds worth $13 million was produced and sold;

3) In that same year, 1969, the Clifton New Jersey secondary schools requested parental permission to swab 6,000 students to check for marijuana use per New York Times report of April 11, 1969 page 12. Thus schools had become aware of the growing drug problem since these ads became legal.

4) By 1971, in the midst of the Vietnam War and massive student protests of the war and campus riots, President Nixon declared that “America’s Public Enemy Number 1” to be Drug Abuse. In a message to Congress, the President requested the creation of a Special Action Office of Drug Abuse Prevention.

6) By 1973 the citizens of New York State were fed up with the drug situation and polls showed that 67% of the adults interviewed supported Governor Rockefeller’s proposal that all hard drug dealers be given life in prison without the possibility of parole.

7) By 1977 the New York Bar Association formed a committee and concluded that the toughest drug laws in the country, New York state’s, had no real effect in reducing drug use, but just clogged the courts and the criminal justice system and set up gridlock in the system.

8) At this point, the drug problem is international and “out of control.”

The evidence of what might occur if the laws on advertising were changed occurred in the case of tobacco. The number of smokers decreased dramatically once those advertisements were banned in 1970. But the experience was never applied to drug advertising. It seems the Big Pharma lobby was stronger than Big Tobaccos. AND THE ADVERTISEMENTS KEPT ON BEING PRODUCED, PUBLISHED AND DISSEMINATED.

A good thing to think about is the amount of money being spent for advertising by the pharmaceutical companies and compare it to the increase in prices of prescription medicines that some people need just to breathe, stay active and even stay alive. After all, it is the consumer who pays for all of this.

The advertisements and marketing produced by the pharmaceutical companies have had a direct effect on our drug problem. When cigarette advertisements were banned the number of smokers dropped completely. If we curtailed the DTCPA we would have fewer people requesting medications from their doctors and fewer medications at home for unauthorized users to pilfer and possibly unintentionally become addicted to.

2. Article by Ann Swanson in Feb. 11th 2015 edition of the Washington Post, “Big pharmaceutical companies are spending far more on marketing than research”

3. Publication by the National Center for Biotechnology Information, a branch of the National Institue of Health in October 2011 titled: “Direct to Consumer Therapeutic or Toxic?” By C. Lee Ventola, MS

How Modern-Day Marketing Makes Good People into Addicts The United States is a unique country in a lot of ways. We are the land of the free, the home of the brave. But there is one area in which we are quite trapped. 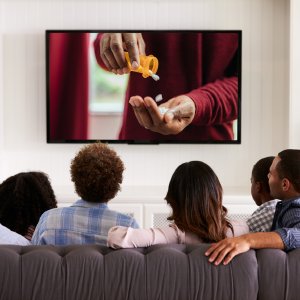 Many of us silently cheer when we hear about a mega-corporation losing a lawsuit against an underdog. This particular aspect of human nature is evidenced in Hollywood films, music, books, pop culture, and bedtime stories.