Addiction Among Soldiers—Helping Our Servicemen and Women Overcome Substance Abuse

Substance abuse among veterans is a growing problem. As military men and women return from deployment suffering from battlefield trauma, substance abuse becomes more prevalent. For those who struggle with physical injuries and horrific memories of war, drugs and alcohol can seem like a way out. So how can family members and loved-ones help servicemen and women overcome substance abuse?

There is no doubt that service in the military is honorable and deserving of respect. Service can be traumatic for those who enlist, with physical damage and disturbing memories becoming a thing of regularity for service members. When military men and women return home from service, they often carry with them physical, psychological, and even spiritual scars.

The hardships suffered while in service often become too much to bear, leading retired or active military members to turn to alcohol or drugs as coping mechanisms. In addition to that, prescription drug abuse is on the rise among military members. That’s because prescription drugs are often offered as a “solution” to physical pain from war injuries.

A decision to experiment or self-medicate with a substance can fast turn into a crippling, seemingly unbreakable habit. That is why it is so essential that the family members of veterans help their loved ones seek proper treatment.

The Crisis Compounds with Suicide

The issue of addiction among service members and veterans is an urgent crisis that we must address. Several studies show a link between substance abuse and suicide among veterans. In one study that involved about 600 veterans who had been deployed to either Afghanistan or Iraq, 39% of them admitted to misusing alcohol, and 3% admitted to abusing drugs. Combined, that’s almost half of all veterans involved in the study.

Sadly, that same study also determined that suicide rates have increased dramatically among active and veteran service members alike. More often than not, substance abuse is a factor for such suicides.

At this point, roughly 1.5 million veterans are addicted to drugs or alcohol or a combination of the two.

There does exist a strong level of stigma against speaking openly about mental issues or trauma within the military culture. A combination of military culture and a zero-tolerance drug policy has led to this. Half of military personnel have reported that they feel as though seeking help for mental health issues would negatively affect their military careers.

A combination of zero-tolerance policies, a harsh life (physically and mentally), and a stigma against seeking help has led to one in ten military men and women struggling with substance abuse.

Another factor is a veteran’s role in his or her family and home life. If a military man or woman comes home from service or deployment and immediately engages in a career, getting an education, or in managing a household, they may not feel as though they have the time or wherewithal to seek help for a substance abuse habit. The problem with that line of thinking is that, sooner or later, a veteran’s addiction is going to take away his or her career, education, family, etc.

What Can Loved Ones Do to Help?

Military men and women are at increased risk of developing substance abuse problems. The years in the service, the number of deployments, and the more injuries and traumatic incidents experienced, all increase the risk of substance abuse. If someone you care about is in service or has served in the military and is struggling with a substance abuse problem, the goal must be getting them help as soon as possible.

Each branch of the military does offer its own substance abuse program. Unfortunately, such programs do not always get to the bottom of what is really needed to help a service member or veteran overcome addiction.

If your loved one has already tried one of these programs and did not find success with it, he or she may be even more leery to seek effective treatment options now. However, you should not let past, failed efforts of your loved one to get clean deter him or her from seeking help at a qualified, long-term center.

As mentioned earlier, veterans and active duty service members are often struggling with multiple crises. They may be faced with physical injuries, psychological and emotional trauma, a spiritual crisis, and an addiction, all rolled into one. That is not something that can be adequately addressed with a few short meetings or a brief stint at an outpatient center.

To truly help our veterans and military servicemen and women, we have to give them the help that they need. We have to make sure that our military personnel, active and retired alike, have access to long-term residential care. Long-term treatment centers offer the safest and most effective means of overcoming an addiction struggle. 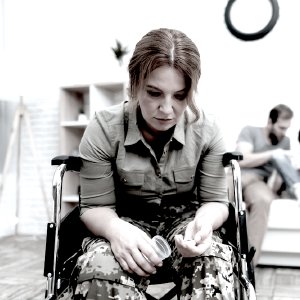