High school and college students in the United States are demonstrating less concern about the nonmedical use of Adderall and other stimulants, which are often prescribed for a diagnosis of ADHD, something that has been in question in recent years. According to a recent survey conducted and published by the National Institute on Drug Abuse (NIDA), the number of students who responded to a survey question regarding their ideas of the perceived risk of Adderall abuse dropped by 6 percent in 2012 as compared with the previous year, representing a noteworthy increase in the general conception of the safety of such drugs.

The findings of this research were the focus of a recent report on Charlotte, North Carolina television news station WBTV. This trend is cause for great concern among parents, educators, healthcare professionals and law enforcement, given that Adderall, Ritalin, and Concerta are all potentially addictive, and the dropping rates of concern in connection with their abuse portend increases in the numbers of young people who will be entering their adult years already addicted to drugs, whether they stay on the ADHD drugs or transition into traditional street drugs.

High school and college students are commonly under enormous amounts of pressure to perform well in school, while also trying to find a way to juggle the demands of social and family life and in some cases working. Between school days that start early in the morning, heavy loads of homework, writing term papers and studying for tests, there often simply is not enough time in the day to get it all done. Students who have a prescription for Adderall or Ritalin often learn quickly that they can stay up longer and focus better by taking more of the drug than they have been directed to by their doctor.

In many cases, they may share the drugs with friends, or may even start selling the pills. Ground into a powder and snorted, the ADHD drugs can produce an even faster and more powerful high, and in this form they are often used not only to get a study boost but also as a party drug. ADHD drug abuse should come as no surprise: Ritalin is chemically almost identical to cocaine, while Adderall is a combination of amphetamine and dextroamphetamine. In fact, they are both included along with cocaine and opium in Schedule II of the Controlled Substances Act which the Drug Enforcement Administration uses to determine how dangerous and addictive a drug is. While on the one hand, we are urgently warning our children to stay away from drugs, we are with the other hand going out of our way to put powerful drugs within their reach; the Wall Street Journal reports that there are currently about 55 million prescriptions written for ADHD drugs on a yearly basis.

Why do teenagers think that ADHD drugs are safe to abuse?

Adderall and Ritalin abuse can cause serious health complications, such as heart problems which will often wind up with a trip to the emergency room. Further, many of those who start abusing these drugs will end up addicted, and in some cases, they will eventually start using other drugs as well. These dangers are evidently becoming less recognized by young people, and the reasons for this are easy to understand.

Teenagers who come into contact with the ADHD drugs, whether they have their own prescription or if a friend does, do not see them in the same light as they do marijuana, cocaine or heroin. Instead of drug dealers, they are being sold by doctors and pharmacists, and they are not “drugs” but medications which have received FDA approval.

Many of those who take these drugs achieve better academic performance, as should be expected from someone who is taking a drug which is essentially speed or cocaine, and this short-term benefit often overshadows the serious long-term health risks. If fewer young people are reporting that they think the drugs are dangerous, it is clear that steps must be taken to turn this trend around. 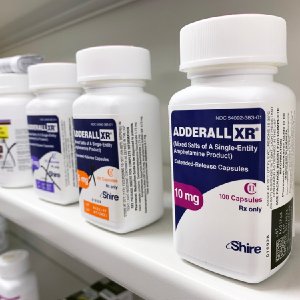